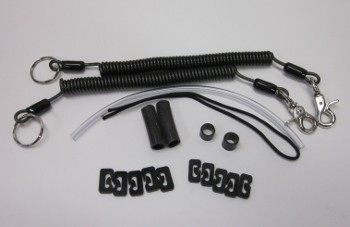 Traditionally, ski leashes have been a pain in the rear, especially the short unyielding leashes that are so common. Having to disconnect the leashes every time to install/remove skins makes them very undesirable. Then there’s the issue of being hit by ones skis if the bindings released. Leashes on bindings without brakes are an obvious must however the concept of disconnecting them in areas of high avalanche risk makes them kind of pointless. But the chance of losing a ski in the back of beyond really instills the need for leashes.

B&D have, over a number of seasons, developed their super ski leash kit to address all these needs.

The leashes extend long enough to allow the skis to be removed to change my skins etc without having to removing the leashes. Plus there’s a breakaway feature that would provide some added safety in a slide or other major situations when one really needed to part company with ones skis.

All the elements of the leashes are designed to work together:

1. A coiled cord that stretches out without considerable force, but returns quickly to a coiled shape to stay close to boots and bindings. The cord also provides a method of dispersing the kinetic energy released in a fall, providing a way to absorb or dissipate the energy over a longer period, thus dropping the peak forces on the leash in a fall. Think crumple zones in a car, or load limiters in climbing.

2. A plastic fuse link that will break around 40 lb or 60 lb depending on the size selected.

4. A snap hook that can be opened with thick gloves, and provides quick attachment/detachment.

The power of this leash is in its ability to reduce the shock of a fall as it is strong enough to resist a minor fall but can break free in an avalanche. The stretching action of the leash minimizes the peak forces placed on the leash during a fall, allowing the attachment (fuse link) to have a lower breaking value. In turn this allows the attachment to break in a situation that has a constant force, such as in an avalanche. The leashes should actually break away at a significantly lower force than your bindings' release point.

1.The leash allows you to exit your bindings to do common actions in backcountry skiing such as installation and removal of skins. You can tour all day without removing the leash. You can even exit your skis to take breaks with the leashes attached (see pic below).

2. The leash provides some relief from the ski in a fall, extending to 6 ft.

3. They have a fuse link that will give way when a constant force is applied.

4. Easy hook up and release. It is easier to connect a leash by wrapping it around the boot, or hooking it to back of the boot, than reaching down to the toe of the boot. This counts double when carrying a heavy pack.

5. You can also attach the leash to your boots before taking your skis off your pack! This is a saving grace when trying to get into your skis on an icy 40 degree slope after climbing down a rock face.

The ski leash comes as a kit with leashes, four rubber sleeves, two sizes of fuse links (that break at approximately 40 and 60 lbf), attachment cord, and vinyl tubing to protect attachment cord from sharp edges.

Weight is 85g per pair. Fitting/mounting instructions are here: