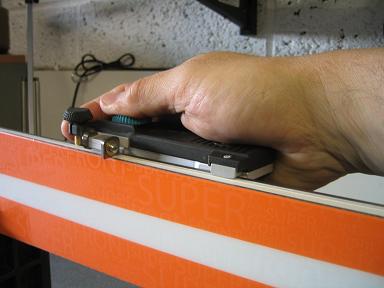 Many skis require the trimming back (or planing) of their sidewalls. It is often required on new skis as the factory sidewall profile is flush with the side edge meaning that the file/diamond stones will snag on the sidewall & not cut the metal. It can also be required on skis that have had quite a bit of tuning & their side edges have become flush with the sidewall causing the same problem.
For the new DIY tuner sidewall planing is the one really scary process as it's the most aggressive of all the process & it usually has to be done first before any other side edge work. However there's really nothing to worry about providing you only attempt to remove a wafer thin amount with each slow continuous pull of the tool down the full length of the ski. It's far better to have to do a few more passes than to try & remove too much in one go & end up gouging a chunk out of the sidewall. 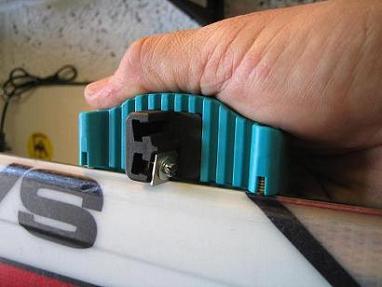 Sidewall removal is one process that a shop doesn't have to worry about as their edge grinding machine will remove any sidewall that's in the way at the same time that it cuts the side edge angle. It's a pity that the manufacturer's don't remove the sidewall, I suppose it's a cost issue as the ski has already been made & any further processes adds to the cost etc.
Skis with a straight sidewalls will almost certainly need work & all race skis will definately need sidewall work as they tend to have higher side edge angles than recreational skis & therefore need more clearance. All my skis have 3 degree side edge angle so on my own new skis I plane the sidewall straight away to ensure plenty of room.
Note: On used skis it's essential to first use an alu-oxide stone on the side edge (see the 'Side Edge Tuning' section) to remove any raised skiing burrs/rock hits as the sidewall trimmer runs along the side edge as any burrs would interfere with the passage of the tool.
Use either a straight or curved carbide blade in a sidewall cutter to match the ski’s existing sidewall profile. If required you can also smooth down the sidewall with various grades of fiberpads backed-up with a block of wood or similar. Racers will want to spend quite a bit of time smoothing & polishing the sidewall to reduce drag to the absolute minimum.

Remember that the sidewall is part of the ski & should be maintained like the rest of the ski with dings/cuts being trimmed smooth & polished to avoid the skis snagging on each other etc.